In 1976 Roger Hall had his leading character from Glide Time blown on-stage through a gust of wind, yelling ‘Wellington, I hate you!’ bringing life – and a box office smash – to a brand-new New Zealand theatre industry.

“We haven’t got over the thrill of seeing ourselves on stage,” says Ross Gumbley, Artistic Director of The Court Theatre. “For years New Zealand audiences had to use cultural shift. They had to go ‘oh yes, that’s funny because that’s what it must have been like in Margaret Thatcher’s Britain,’ whereas when Roger Hall had that character come on at the beginning of Glide Time saying, ‘Wellington, I hate you,’ the audience thought, ‘Oh my god! He’s writing about us! That’s about us! That’s not about anybody else in the world’.”

50 years ago, there wasn’t a professional theatre industry in our country – but now it’s bigger and better than ever.

According to Playmarket (a not-for-profit organisation representing New Zealand playwrights), of the 221 works produced professionally across Aotearoa theatres in 2017, 79% of them were New Zealand in origin, with no professional company staging less than 50% Kiwi works (Playmarket, 2018).

That means 79% of the works onstage in our professional theatres are homegrown - sharing stories for and about us.

That’s a huge jump for an industry that, until fairly recently, was considered to be proactive if they were staging one or two New Zealand plays a year.

Here at The Court, 58% of our 2018 mainstage & Forge productions are Kiwi plays, with that number jumping to 72% when you include our kids, education, literary and Court Jesters productions.

The history of New Zealand theatre goes back further than you might think, with Marcilina recorded as the first original New Zealand play, staged back in 1848 by British-born theatre lover James Marriott. The play was performed in Wellington’s Willis Street in Marriott’s own Britannia Saloon. 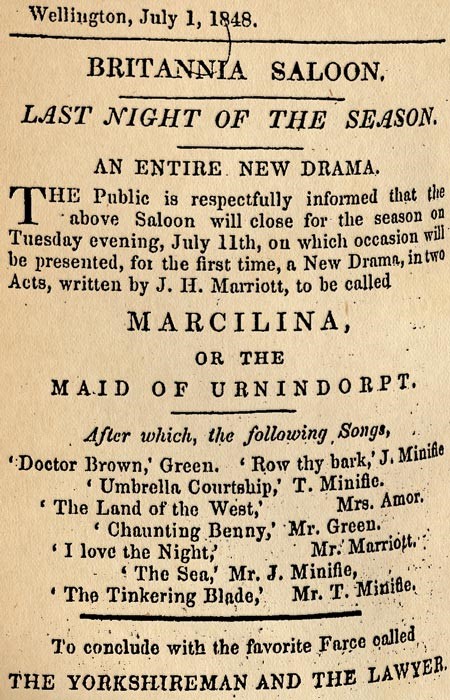 An advert for the play in the Wellington Independent Newspaper

The plot of Kainga of the Ladye Birds  represented New Zealand’s confused national identity at the time, with Susan Lillian Williams describing the play as, “a curious hybrid cobbled together from a hotchpotch of theatrical traditions borrowed from the Eurocentre.” (Williams, 2006.)

The play is indeed a hybrid, taking the characteristics of a traditional English pantomime and dropping in ‘Māori’ characters – all played by and presenting Pakeha ideals.

New Zealand theatre borrowed heavily from English storytelling traditions in its early years, with many plays even set in Europe rather than the country in which they were written.

The dominant culture at the time was European, and New Zealand playwrights sustained this perspective at the expense of exploring and defining their own culture – until Bruce Mason came along.

Mason was New Zealand’s first professional playwright and is widely heralded as the writer who laid the foundation for Kiwi theatre becoming mainstream. Mason, in refusing to accept the cultural cringe that surrounded New Zealand storytelling, wrote expansively throughout his career, including well-known plays The End of the Golden Weather and The Pohutukawa Tree. He also helped found New Zealand’s first professional theatre, Wellington’s Downstage Theatre (1964 – 2013).

Before the birth of professional theatre in New Zealand, radio was the preferred medium for theatrical writers, with more opportunities and better pay. With the formation of the Queen Elizabeth II Arts Council (now Creative New Zealand) however, professional theatre began to grow rapidly in both venues and writing. Downstage Theatre was followed by Auckland’s Mercury Theatre in 1968 (which closed in 1992, the Auckland Theatre Company replacing them that same year); The Four Seasons in Whanganui (1970 – 2000); our Court Theatre in 1971; Palmerston North’s Centrepoint Theatre in 1974 (where Mum’s Choir was first written and produced by then Artistic Director Alison Quigan) and Dunedin’s Fortune Theatre (1974 – 2018).

Playmarket was also established in the ‘70s, hosting workshops and offering free script advice in a bid to boost the output of New Zealand plays. It paid off, with 106 scripts submitted between 1975 -1976 (Playmarket, 2013).

The play that defined the era, however, came from television writer Roger Hall in 1976. Glide Time was a satirical comedy about the life of public servants that became a bonafide hit – and was even turned into a TVNZ sitcom that ran for 5 seasons.

Glide Time rang in an era when New Zealand theatre was becoming a professional industry, rather than just a community endeavour, with the doors soon opening for all playwrights.

The feminist political drama Wednesday to Come was first performed in 1984, launching the career of Renée. Just as Mason is noted as being a pioneering figure for New Zealand theatre, Renée is a pioneer for women in theatre and in 2006 was made an Officer of the New Zealand Order of Merit for her services to literature and drama, with many of her plays putting working class women in the spotlight.

Similarly, Māori theatre began growing in the 1980s, with Māori playwrights given opportunities to tell their own stories, rather than Pakeha representations which had defined their theatre history up to that point.

This was hardly the beginning of Māori storytelling, but it was the start of a modern and professional form of Māori theatre. Performance-based entertainment was historically central to Māori society with whare tapere (sites of storytelling and other entertainment) a feature of community life long before English settlers brought Western concepts of theatre with them.

Adapting to mainstream forms of entertainment, several Māori theatre companies began in the late ‘60s and ‘70s, including the Māori Theatre Trust, Te Ika a Maui Players and Maranga Mai. In 1983 The Depot Theatre opened, making New Zealand work their sole priority. They later began focusing exclusively on producing, commissioning and developing theatre with a distinctly Māori voice and are now known as Taki Rua. Earlier this year their production of He Kura E Huna Ana (first performed here at The Forge at The Court in its 2015 development season) became the first adult-oriented play perfomed in te reo Māori to tour Aotearoa.

In the ‘90s Asian and Pasifika forms of New Zealand theatre also began appearing on the scene. Asian theatre had been performed in local communities since early migration in the 19th Century, but there was no professional theatre that reflected the modern Asian-Kiwi identity until Lynda Chanwai-Earle premiered her one-woman show Ka-Shue (Letters Home) in 1996. Indian Ink founder Jacob Rajan followed her ground-breaking performance with his own solo showcase in 1997, Krishnan’s Dairy. Laughing about their similarly small casts, Chanwai Earle told Renee Liang they both had to produce one-person shows “because there weren’t many other Asian actors around!” (Liang, 2010.)

Now, 170 years on from when it all started, what defines a New Zealand play in 2018 is limitless. But the thrill of New Zealand storytelling is still as fresh and powerful as ever.

Find out more about The Court Theatre's Literary Programme!