The Court has been producing Māori work for over two decades, however in recent years it became clear we weren’t doing enough to provide a platform for Māori and Pasifika theatre practitioners. 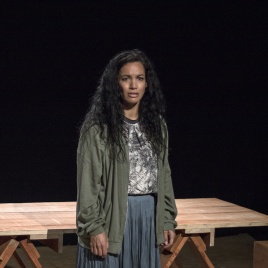 Approaching this topic, we came from a point of ignorance. We had a very humble understanding of the fact we didn’t know what it meant or what it looked like to support, grow and present Māori and Pasifika work. To this end, we have never been prescriptive in what we thought Māori and Pasifika theatre should be. Instead we communicated with those involved in Māori and Pasifika theatre and did so with an open heart to see how we can grow and how we can learn as an organisation. We fostered those communications and through a steady increase in the work that we’ve programmed, we got to a point where in 2016 Waiora made its way onto the mainstage. This is an initiative we remain committed to. We want to have at least one work by a Māori or Pasifika playwright in every main season.

The Court’s journey to cultural inclusion began with Taki Rua Theatre Company when James Ashcroft was Artistic Director. The two companies joined together to interview Māori playwrights across New Zealand, and out of these interviews Chris Malloy was appointed The Court’s Māori writer-in-residence. The play Chris created in conjunction with The Court’s literary department was Pūtōrino Hill, which was workshopped in a development season with Taki Rua. This play went on to receive positive reviews around the country, one of which stated the script has “a power that tugs away with you long into the night”.

Our work with Māori and Pasifika practitioners in recent years has led to significant cultural changes at The Court. We put a much greater stock on how we introduce and welcome people into the company, regardless of their ethnicity, and we place high regard on the times that we come together as a theatre community. We acknowledge that, as the country’s biggest theatre company, we are exceptionally busy - we can be producing 18 or 19 shows a year. Therefore, one of the cultural changes we have seen within the company, as a result of our interactions with Māori and Pasifika practitioners, is to ensure we are not producing just the play but that we are a whanau producing the play together. This understanding of who we are culturally has been hugely influenced by the work we have done with Māori and Pasifika theatre practitioners. 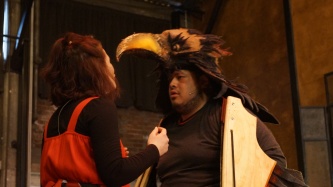 The Court’s work with Māori practitioners in particular has led us to producing three bilingual works in English and te reo Māori for Canterbury primary schools over three years. These works, created by Rutene Spooner and Holly Chappell-Eason, have been developed by consulting with Māori communities, then devising and retelling these stories. The work has then toured and played in front of 35,000 primary school students. These touring shows have become a very important part of The Court’s work. All the work we do for our youngest audience members is crucial, as it’s at this point in life when many people fall in love with theatre. That’s what we want to achieve. We want the young children of Canterbury to fall in love with theatre, so that somewhere in their bones, they have a fondness for this art form. We want to bring Māori and Pasifika stories to them and find common ground from that rich heritage of storytelling.

The Court commissions plays, and part of our commissioning strategy is to make sure that, through the work we commission, all groups are represented within our season. Supporting the voice of the indigenous people of New Zealand on stage is a major remit for us. In 2016 we remounted on the mainstage Hone Kouka’s seminal work, Waiora. Under the direction of Hone himself we saw the play has lost none of its ability to move an audience. The play’s theme of what is lost and gained when people are displaced has grown even more resonant in recent years. With an eye to the future, the company has commissioned Hone to write a new play and we very much look forward to our ongoing relationship with such an important Māori artist. 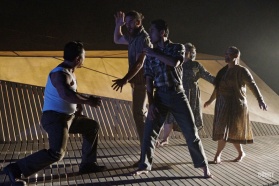 The Court has been proud to present, and co-present, a number of Māori and Pasifika works over the past three years including the primary schools touring shows, Maui and the Sun; Matariki: The Little Eyes in the Sky and Matatihi: Maia’s Journey of Bravery. The Forge stage is proud to have hosted Taki Rua and Tikapa Productions with their important play Not In Our Neighbourhood, written and directed by Jamie McCaskill. Taki Rua returned to The Court again with the charming te reo work, Whakaahuatia Mai by Kahu Hotere. The Forge then presented Oscar Kightley & Dave Armstrong’s heart-warming Kiwi-Pasifika story Niu Sila in 2015. This was followed by The Court’s staging of its first full te reo piece with the development season of He Kura E Huna Ana, written by Hōhepa Waitoa. Two years later, in 2017, it was delightful to programme a full season of the play, directed by Nancy Brunning. The growth of the piece had in those two years mirrored The Court’s own journey of working with Māori and Pasifika practitioners. 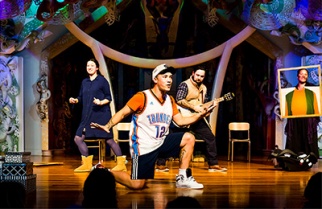 As we move into the future, we want to see Māori and Pasifika theatre have parity with the traditions of European storytelling in New Zealand. We want to grow new audiences that realise that this theatre company is their theatre company – and they realise it because they see their stories being told. Stories they can identify with and stories that make sense to them. We want our focus to carry on being a genuine mirror held up to the society so that The Court programmes seasons that accurately reflect the people that live in this part of Aotearoa. We want to recognise and work with mana whenua and offer what support we can to develop actors, writers and directors. It’s important to us that we create stepping stones into the theatre for all ethnicities.