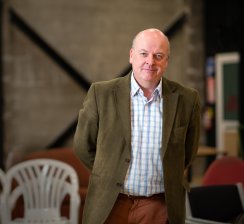 The Court Theatre’s Chief Executive Philip Aldridge today announced his resignation after thirteen years in the role. However he will not be lost to the arts, as he is taking on the role of Chief Executive for The Arts Centre.

Aldridge said it was not an easy decision to make leaving The Court, and it was with a heavy heart and mixed emotions that he told The Court Theatre community of his decision.

Aldridge says, “It has never been less than huge fun, compellingly complex and constantly challenging. There is so much more to be done and inspiring initiatives yet to be undertaken and I am going to be sorry not to see all of these things through to fruition.”

Court Theatre Chairman, Steven van der Pol said, “Under Philip’s watchful eye, The Court has evolved from being the largest tenant at The Arts Centre to the largest theatre company in the country and now – measured by attendances – the largest performing arts company in New Zealand. We wish him well at the Arts Centre.

“While we are very sorry to see Philip leave,” said van der Pol, “it is an exciting and pivotal time in the long history of The Court Theatre and we will start our recruitment campaign for a new chief executive immediately.

Aldridge will depart The Court in June with the knowledge that of the 1.28m attendances at all companies supported by the arts council and across all art forms (visual and performance), 10.5% of them are at The Court. This is a figure that will hold him in good stead as he takes on the next chapter of his career.