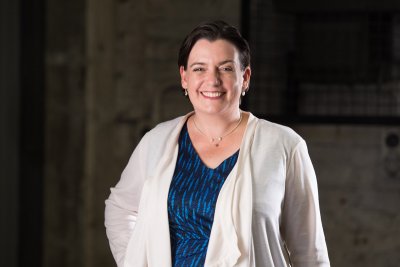 In each of our mainstage show programmes a member of The Court Company is profiled, giving you background information into how The Court does what it does - and with whom! In the 2017 show programme for Ropable we profiled The Court's Literary Mananger, Roanna Dalziel.

How long have you worked at The Court Theatre?

I first worked at The Court Theatre as an associate member of The Court Jesters many moons ago (more moons than I care to count).

I came back in December 2014 in a front of house role. I have had the privilege of working closely with The Supporters’ Committee and the ushers. I found it amazingly easy to work with these volunteers as they are so hard-working, cheerful and kind. I previously worked in corporate and banking law globally and it was so nice to switch from hard nose negotiations to find a gentler working style within myself, as inspired by these volunteers. I remain very grateful to them all.

Then, in October 2016, I moved into the Literary Manager role.

What does being a Literary Manager mean?

I work with Ross Gumbley, the Artistic Director, to advise him on plays that we are considering for development or programming. My goal is to link playwrights, through their works, to patrons of The Court in a high trust environment. Our patrons trust us to bring the NZ voice onstage to exceptional standards and NZ playwrights trust us to treat their works with respect.

It almost goes without saying that playwriting is not an easy thing by any stretch of the imagination – it takes such enormous skill, talent and knowledge to shape a play, to drive stories and to create memorable characters. Not to mention any playwright’s tenacity and passion to find the time and determination to spend long hours, usually alone, writing a play.

It goes almost without saying but, in the context of my job, it needs to be said. With plays that we are developing, I need to find supportive ways that best suit the playwright.

One way of doing so is sourcing and producing the readings we show in our Fresh Ink series. We aim to find works that can benefit from a two or three day development process followed by a reading with our patrons’ feedback. Playwrights can find it enormously helpful and exciting but it also can be daunting to give a baby public airing when it needs careful nurturing at that delicate stage.

Another way is through commissioning plays – we have some exciting works in the pipeline!

I read a lot of new plays that get sent into the theatre, particularly from Playmarket (literary agent to NZ playwrights). I also read published plays including the classics; scouring them for what does and doesn’t work.

How did you come to choose this career path?

When Ross mentioned the possibility of the role to me, I don’t think I actually spent any time “choosing” it. I was so quick off the mark to say “pick me, pick me”. It’s a dream job.

What’s the most challenging part of your role?

It would have to be the fear of discouraging a playwright.

I also have to remember at all times that appreciation of plays can be subjective. I can ask questions like: “does the play prove its dramatic premise?” and “can we help this playwright communicate to the audience?”. That helps.

What do you enjoy most about your job?

I am so fortunate in this role to be reading loads of plays, absolutely entranced, gasping or even (somewhat embarrassingly) sitting in my office in tears because I’m so moved by them.

What qualifications do you need to do your job?

It’s possible to obtain secondary and tertiary qualifications relating to theatre and specifically to dramaturgy (which is the practice of advising on a particular play including about structure and character).

What would you say to anyone who wants to pursue this as a career or take part in community theatre?

Read and go to as many plays as you can possibly can. I would also like to say “go for it”. Get involved in any aspect of theatre as this will help you appreciate (and delight in) the logistics, creativeness and inspiration involved.

Whether as an actor, director, dramaturg, administrator, front of house manager or an audience member, involvement in theatre can deeply enrich life. We can interpret characters and stories from incredibly clever people. The enormity of it can overwhelming. We have to protect and grow our playhouses – they bring something unparalleled. So get involved – the more the merrier.