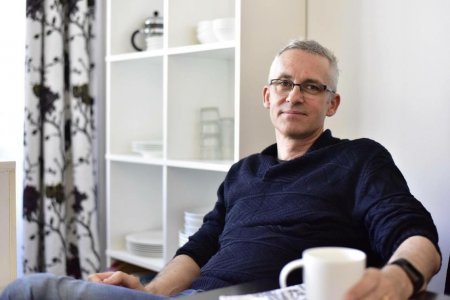 With a career spanning over 30 years across stage and screen, The Father is Simon Bennett's mainstage debut here at The Court Theatre. Before opening night, we sat down with Bennett to discuss the importance of this story, his own connection to dementia and why The Father is an unmissable piece of theatre.

What can audiences expect from The Father?

Audiences can expect a play rich with ideas and theatrical surprises. The play combines black comedy, farce and tragedy to conjure an experience that is surprising, funny and moving. An outstanding cast, led by Mark Hadlow, will navigate a twisty narrative current, adrift on the rapids of unreliable memory, giving the audience a confronting and unforgettable night at the theatre

Why do you think telling this story is important?

Our population is ageing, and modern medicine keeps people alive for longer. Therefore, dementia is touching more and more families. The challenges faced by Anne as she tries to do the right thing for her father, and by Andre, who fiercely fights to keep his independence, will be recognised by many people. This is a conversation about compassion, and that is important.

You’ve had a prolific career within the television and film industry – what keeps bringing you back to theatre?

I started out in theatre, abandoning a law degree when I fell head over heels with my vocation. So theatre was my first love. I’ve been fortunate to have been able to work as a director and producer for 30+ years in TV and film as well as stage. Whichever medium I’m working in, I’m still dealing with actors, stories and scripts - which I love. However, for me, nothing beats the long rehearsal process of theatre, inexorably moving towards the point at which an audience will be sharing the experience. And nothing beats the thrill of sitting in a theatre amongst an audience, feeling their engagement with the live event unfolding before them. Theatre at its best generates a charge between audience and performers that is unmatched anywhere else.

Do you have much experience with, or a personal connection to, dementia?

My father died two years ago, after a long decline due to dementia. So I had first-hand experience of the indignity the disease brings, and the challenges faced by the family of the sufferer. When I first read the script of The Father, I recognised its truth and wanted to work on it.

What is your vision for this production?

I don’t see my role as a director to impose a vision on a production. I see my role as a guide or interpreter. I will explore the text and characters with the cast, opening up possibilities, encouraging and challenging them. At the same time, I’ll work with all the other artists involved in a theatre production, bringing their creative contributions together to forge something that will hopefully be coherent and clear. I’m responsible for shaping the musicality of the play, endeavouring to shape the audience’s engagement with the experience across the evening, so they come away satisfied, entertained and provoked.

Why is this play an unmissable piece of theatre?

The writing is extraordinary. The cast are superb. The content is topical. It’s impossible to experience this play and not be moved.

The Father runs until the 24th August. You can learn more and book tickets here.