Audiences can expect plenty of sword-fights and Tim Tams from The Court Theatre’s latest comedy, combining the worlds of Shakespeare and New Zealand to hilarious effect.

A collaboration with award-winning theatre company Trick of the Light (The Bookbinder; Tröll), Lysander’s Aunty is a radical comedy that takes beloved characters from A Midsummer Night’s Dream and transports them into the New Zealand bush.

Nominated for the prestigious Adam New Zealand Play Award, this quirky comedy is written by multi award-winning writer Ralph McCubbin Howell (recipient of the 2014 Bruce Mason Playwrighting Award) and is directed by The Court’s Associate Director Dan Bain (A Christmas Carol; Stephen King’s Misery) and Trick of the Light co-founder Hannah Smith (Most Promising Director at the 2013 Chapman Tripp Theatre Awards for The Road that Wasn’t There).

Explaining the plot of this imaginative play, McCubbin Howell says, “Reading A Midsummer Night’s Dream a few years ago, I was struck by the fleeting mention of Lysander’s Aunt. She is introduced as someone who might help the young lovers defy Athens law and elope in the woods, but the plot then takes another turn and she never gets mentioned again. Shakespeare is littered with characters like this, but this one in such a well-known play seemed particularly intriguing. Who is this law-snubbing, free-loving aunty? Why is she in the woods? And what’s she doing helping runaway lovers elope?” 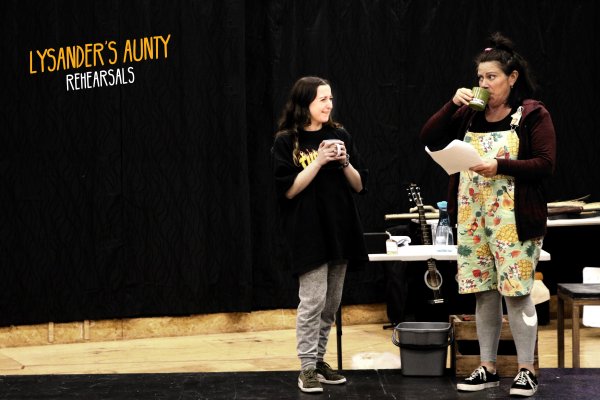 Fascinated by this idea, McCubbin Howell crafted Lysander’s Aunty, transporting a collection of Shakespeare’s most famous characters (like Lysander, Hermia, Helena and Demetrius) to Aunty’s house in the New Zealand bush, imagining what A Midsummer Night’s Dream might have looked like in an alternate universe.

“Shakespeare is full of characters - often women - who don’t get a fair suck at the sav. The idea of fleshing out Lysander’s Aunty’s life and potential influence on the story is what led us to this,” adds Smith.

You don’t have to be a Shakespeare fan to enjoy this comedy, with plenty of fun whether you’re a bard buff or not.

“If you are incredibly familiar with A Midsummer Night's Dream you will enjoy this; if you vaguely know it, you will enjoy this; and if you don't know it at all, there's still plenty in Lysander’s Aunty to love. Ultimately, this is just a rompy New Zealand comedy that uses Shakespeare characters and situations as a springboard,” explains Bain.

Hilarious, unique and a little bit magical, Lysander’s Aunty will be taking audiences on a journey that puts a fresh Kiwi spin on one of the greatest stories ever told.