Experienced set designer Harold Moot was given the task of producing a rock concert theme for The Court’s production of Jesus Christ Superstar.

So, The Court’s mainstage now has a touch of glam and metal.

Harold is also very familiar with Stephen Robertson, having first worked with him in the early 2000s on Fiddler on the Roof.

He sees his role as realising the director’s vision - understanding what he or she wants on stage, then transforming ideas into reality.

“I try to fit my style to fit the play and director – and to be quite flexible,” he says. 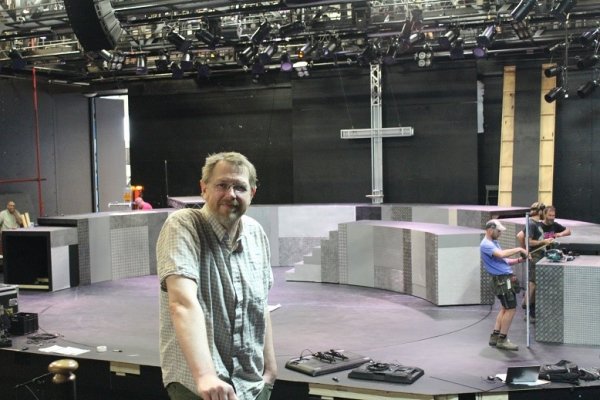 Picture: Harold Moot, with the under-construction set at The Court Theatre behind him.

The design work has been months in the planning, which began with a design meeting with Stephen Robertson, from which a concept was developed. Then working drawings where produced.

The Court also has its own team of talented production staff to turn the working drawings into reality, and that team has been burning the midnight oil to meet deadlines in the last two weeks.

Harold’s set includes a revolving stage floor and a curved raised walkway and a structure that accommodates an on-stage six-strong band. He has also come up with his own take on depicting the crucifixion and resurrection.

Of the set design, he says a lot of it is “implied” – you create a general impression and atmosphere that can be changed through lighting.

Now, audiences can see the finished product for themselves.

To find out more and Jesus Christ Superstar and to book tickets, click here.