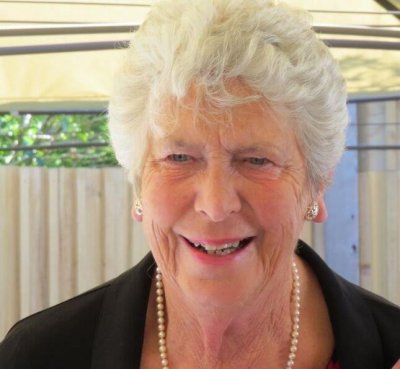 Anne Wright is a familiar face around the theatre - she's been ushering for nearly 50 years, going back to The Court's early days in the 1970s! In her volunteer usher role, Anne greets our patrons and makes sure our audiences have a fantastic night out when attending one of our shows. While Anne can't welcome you to the theatre at the moment, we thought it would be a fantastic opportunity to introduce her and share her story!

When did you first become a Court Theatre usher?

I have been an usher for nearly 50 years, beginning in the early 1970s. Originally a friend asked me to help with a production which was at The Court when its venue was the Orange Hall in Armagh Street. In those days on arrival the ushers were asked to sweep the floor of the auditorium which was quite a task, and while making coffee we had to ensure the zip did not whistle as it could interrupt the production! Many of my friends also became ushers and we always did the 6.30pm production as we would head to The Court after work. Most of those friends have only retired in recent years so gave many years as volunteers.

What do you love about being an usher?

Being a Court Theatre Usher has given me the opportunity to volunteer, while at the same time doing something I enjoy. I had a large group of friends ushering and have made many other friends through undertaking this. I love the theatre and being in this position has meant I can also attend the shows. Luckily I have never had any serious emergencies in all the years I have been volunteering, the only situation I can remember was when someone collapsed and we had to get the emergency services in.

What’s your favourite production you’ve seen at The Court?

I have enjoyed so many of the productions and my favorites have been the musicals and comedies. It is hard to pick one out but if I must I have very fond memories of The Big OE which was staged in 2002. It was very funny and was typical of life, plus having travelled a lot over the years I could relate to some of the antics.

What do you do when you’re not volunteering at the theatre?

I have been retired for a long while now but manage to keep very busy. I do one other volunteering job, am an active member of senior clubs, I enjoy my garden, golf, golf croquet, spending time with my extended family and still manage to travel on a regular basis mostly in New Zealand and sometimes over the Tasman.