Layla Moutrib will defend a title at the World Solo Salsa championships in Brisbane next week.

Moutrib won the Amateur Salsa and Latin Solo categories in the same city last November and has been practicing morning and night in the hope of completing a double.

The Christchurch born Sponsorship Manager at The Court Theatre has been dancing salsa for eight years after being inspired by her mother, an accomplished Argentine tango dancer, to take up Latin dancing.

She has been involved in competitions for five years under the tutelage of Emily Glubb of E-Dance Productions (EDP).

Her preparation with Glubb has involved practice before and after work going over choreography, honing techniques and learning shines - footwork patterns.

"If you did a story, then it should be about her," the champion dancer maintained of her success to date. "It's thanks to her drive to push us further than we think we can go.” 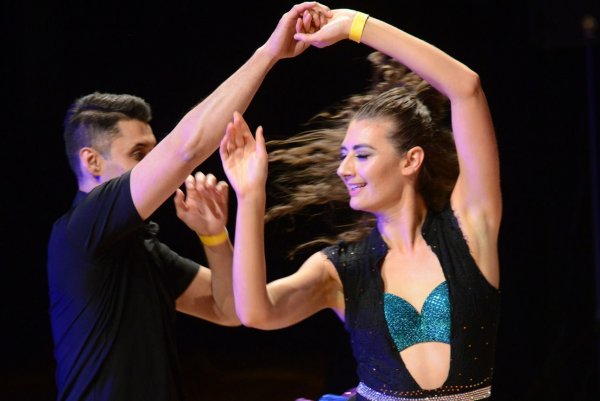 EDP dancers excelled at the 2017 event, and since then have won titles in New Zealand including both the Latin Shines and Salsa Shines teams sections at the recent Salsa South Island Competition.

The four-day Brisbane competition, starting November 22, is part of the city's Latin Dance Festival and will draw thousands of dancers from all over the globe.

Moutrib has also been preparing her own costumes, including sewing on hundreds of diamantes - a task which might have been expertly handled in the costume department not far from her office at The Court... but with the curtain going up on Jesus Christ Superstar at the theatre in a few days, they have more than enough work to complete.

Moutrib enjoys the energy of street salsa dancing and says she wants to challenge herself further in 2019 by travelling to learn from the masters of mambo salsa in Europe.

Before that, though, will be a holiday in Vietnam after the Brisbane event.