For the first time in over a decade, the National Theatresports Championship is back in the hands of The Court Jesters!

The trio beat out some of the funniest comedians from around the country in the biggest comedic sporting event in New Zealand. 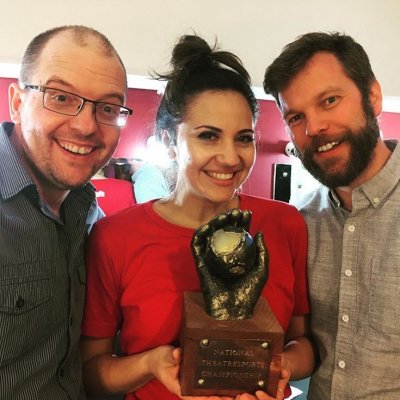 “I’m very proud of my company,” says Court Jesters Artistic Director Dan Bain. “It speaks to the consistency of the work that we do.”

The championship returned for the first time two years ago at The Court Theatre after an almost decade-long break. Since then, the last two championships have taken place at Centrepoint Theatre in Palmerston North, the stomping ground for former winners, Spontaneous.

“It used to be really big in the ‘80s and ‘90s – I remember when it was on TV!” says winning team member Brendon Bennetts. “Then the National competition totally disappeared, until The Court restarted it two years ago.”

Talking about their secret for success, Bennetts says, “Our secret weapon was definitely Monique Clementson. She’s recently joined the Jesters and hasn’t been to any of the competitions – so the other companies had no idea how amazing she is! Seeing her and Jeff Clark perform together was just phenomenal – and that’s definitely why we won.”

Bennetts has been performing theatresports for over twenty years. With the Canterbury Theatresports™ in Schools competition coming up in September, he encourages all young people to get involved and give improvised theatre a go.

“I started theatresports twenty years ago and it's given me so much confidence and has helped me through so many situations in life where I have to think on the spot or be creative!”

Theatresports™ in Schools is an annual improvised theatre competition held in September. You can find out more and register your school here.

If you’re looking to see The Court Jesters perform, you can catch them in late-night comedy show Scared Scriptless every Friday and Saturday or at family-friendly showcase The Early Early Late Show the first Sunday of every month.

The team behind Scared Scriptless, these masters of corporate and event entertainment know how to do funny.