The heart of our city is getting better all the time. I'm going to describe an extraordinary plan. It is a ground-breaking vision for the performing arts in Christchurch that will transform an entire city quarter.

It will contribute to making Christchurch a compelling destination for local and overseas visitors. It will attract people to live in Christchurch and it will enrich the lives of us all who have lived through testing times to see our city emerge as a magnificent new community.

Innovation and creativity are key notes of the city's vision. This plan is creative and innovative.

The plan embraces the ambitions of the Crown and the Christchurch City Council as described in the Blueprint plan of 2012 and the Council's masterplan of 2016 for the land acquired by the Crown bounded by Armagh and Gloucester streets between Colombo and New Regent streets. 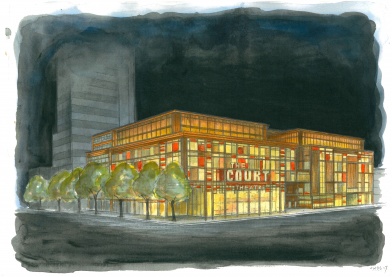 The wider quarter is securely book-ended by the Isaac Theatre Royal (strong for touring shows and Showbiz) and the Town Hall (accommodating the Christchurch Symphony Orchestra) with The Piano's successful launch already adding vibrancy. When fully realised there will be 11 performance spaces.

This is a bold concept where the money invested by Crown and Council will enable the performing arts companies on the site to eventually de-couple from public funding. Public investment now will eliminate public subsidy later. This is the persuasive idea at the heart of the proposal.

The predominant building material across the site will be timber, both structurally and in cladding. Timber from our land – not imported – and repurposed where possible. Wooden building technology developed at the University of Canterbury that tells a story of who we are and what happened to this city. It is pioneering and original with a compelling narrative.

This will be a point of distinction and facilitates a key message: "Everything you spend in the wooden buildings, whether buying a drink, a ticket or a painting or indeed parking your car, financially contributes to the performing arts on this site".

This is a vision of a mixed-use development that will be achieved in stages. There is insufficient capital to realise the complete plan immediately. There will be a car park adjoining the theatres which will be a flexi-space building adaptable to other uses when we no longer use private cars.

For now parking is important for performing arts patrons and is imperative for audiences at The Court – the ease of parking at the theatre in Addington has become an essential part of the theatre experience.

The site earmarked for the Court Theatre in the performing arts precinct on the corner of Gloucester and Colombo streets.

The next development will be The Court Theatre. It's worth noting that no other city in the country has anything like The Court. It is the largest performing arts organisation in NZ and as such it anchors the quarter.

Ten years ago, when it was last measured, The Court commanded a third of all attendances at subsidised theatre in NZ. Today that proportion has significantly increased as attendances have grown.

Audiences, attending during the night as well as the day (28,000 come during the day) bring activation seven nights a week, all year round. Annually 150,000 people currently attend The Court which only runs one of the two theatres it had at The Arts Centre. This is a unique (a much overused word but appropriate as no one else in the country does it) asset and will activate the whole area.

A pub theatre, privately funded and run as a commercial activity, will host small scale gigs and stand-up comedy in an upper room, and bands downstairs in the bar – activity that complements performances at the Gloucester Room (at the Isaac Theatre Royal) and The Piano. 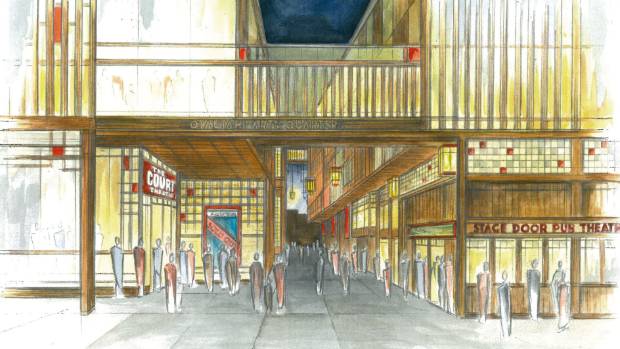 There will be a studio/community theatre, which will host local and touring performances, including dance.

There will be a small amphitheatre, surrounded by shops and cafes and accessed by laneways and snickets that will serve impromptu performance, street art and the festivals.

Commercial assets such as the flexi-space building will cover The Court's increase in operational costs associated with the move and as the area increases in activation further activity such as residential, retail and office space will provide revenue to fund other performing arts activities. This includes the development of the community theatre.

This is a vision for a performing arts quarter that will be a vibrant hub of performance activity made sustainable through complementary commercial activities. It envisages small scale enterprises around the arts companies, sole trader shops, and small office developments which build on and echo the scale of neighbouring New Regent St.

There are tests to overcome. Funding is constrained. The plans have been scaled back to acknowledge funding constraints and the challenge now will be to deliver public buildings of city centre stature within limited budgets.

This vision will now be formally considered by the Council. It is another building block in the 21st-century city we are creating. A place of creativity and innovation, of fun and vibrancy. Isn't Christchurch an exciting place to live?