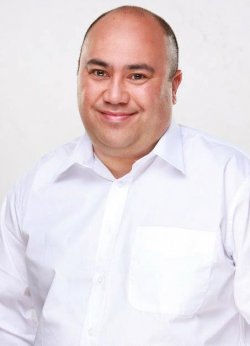 Aroha Awarau is a New Zealand playwright and journalist who is opening our Fresh Ink rehearsed reading series with his glitzy, Hollywood comedy, Luncheon as part of the Open House Festival. Before beginning his journey through Fresh Ink, Aroha sat down to tell us all about his glamorous script - and why he chose the 1958 Academy Awards to be his focus...

As an avid theatregoer, I always wanted to challenge myself and write a play. I had been a journalist for a while and I wanted to branch out with my writing.

The idea of Luncheon came to me while I was watching a production of the Caryl Churchill play called Top Girls. Like Luncheon, it’s a play filled with women and it also has a Japanese character. In this production of Top Girls they cast a Maori actress to play the Japanese character. I thought it was an unusual choice, especially when Hollywood is often harshly criticized for similar behavior. I imagined what I would write if I had to write a play with a Japanese character. I grew up knowing the story of Miyoshi Umeki, who was nominated for an Academy Award for best supporting actress in 1958. At that exact moment her journey and her achievement came to me. I wondered what it would have been like for her to attend a luncheon with the rest of the women in her category four days before the Oscars. I formulated the entire play sitting there watching Top Girls, and started writing Luncheon as soon as I got home that night. I also spent years writing for woman’s magazines and so I wanted to write a play that filled the stage with women, and give our talented actresses meaty roles to sink their teeth into. I feel like I have achieved that with this play.

As a Māori playwright from Hawera, what interested you about the glitzy world of Hollywood in the 1950s?

I’ve always been a movie buff, even as a child. I remember quoting Bette Davis to my mother when I was eight years old, hence the reason why I knew about Miyoshi and the Oscars. It’s a world that I know because to me, Hollywood and movies were like an escape from being a Māori boy growing up in Hawera. I spent my entire life wanting to get out of the small Taranaki town and felt like I didn’t belong, similar to many of the stories of all the Hollywood starlets and actors. Miyoshi is a reflection of me, because despite her differences, she was true to herself and triumphed. I love the fact that Luncheon is my very first play because it best represents who I am as a person and as a playwright and I am deeply humbled that audiences have responded positively to it.

I’ve been through the workshopping process several times with other projects and as a writer I think’s it’s a privilege and a luxury to have a team of actors and dramaturgs to work together for a common goal - to make your text better. So I’m really looking forward to this amazing opportunity. And of course, ultimately, I’d love to see Luncheon getting a second life on stage and it would be a dream come true if it was eventually programmed. I wrote it because I wanted to give actresses, women, meaty roles on the stage, and I think there is a hunger and need for women to be represented in all areas of the arts.

Following the five women nominated for Best Supporting Actress in 1958, what makes their stories relevant in 2019?

There stories are really relevant today, a lot of the issues they discuss are issues pertaining to woman today such as abortion, domestic violence, sexual harassment, career and relationships. Especially in the #MeToo movement this is a slice of the past showing how women have struggled and survived for so long.

Focused on Miyoshi Umeki, the first Japanese actress to be nominated for an Oscar, what interested you about her story?

As a child, I used to read a lot of movie encyclopedias and remember seeing the picture of Miyohsi in her bright red kimono holding the golden Oscar in 1958. It was an image that stayed with me for a very long time, because that image represented struggle, triumph, overcoming racism and success. Here was Miyoshi, unrelentless in representing herself as a Japanese woman, not choosing to wear a Hollywood gown but instead her traditional attire, during a time when the relationship between the US and Japan was at an all time low. She was proud of who she was and where she came from. As a gay Māori boy, this was the positive imagery and message that I needed to see in order for me to be successful in my own life.

Luncheon will be performed on the 14th April at 4pm - and all tickets are free! You can find out more and reserve your seats here.